How it all started

The story behind the race 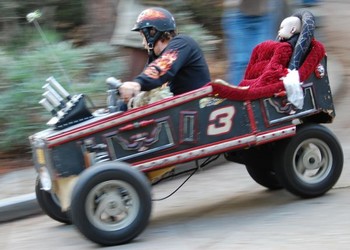 Having participated in a soapbox race as a young teen in Saltaire, Fire Island, NY, Mik Muller thought such a thing would work well somewhere in Montague. He'd actualy been thinking about it for years until a friend said one day "Well, is this the year?" So the race plans got started. But where to hold it? And why?

The "where" was pretty simple. Although there are many hills in Montague, including the very high Dry Hill and neighboring Taylor Hill in Montague Center, Mik thought it needed to be closer to the businesses in town, should not cross any major roads (thus requiring a complicated street shut-down plan) and have decent access for spectators. And it needed an element of skill -- not just a straight hill. No, the Montague Soapbox Race needed a bumpy curve near the bottom. Something to force the racer to make their vehicle sturdier and maneuverable. The Unity Park hill (1st Street, from Kostanski's Funeral Home) was perfect. It had a steep hill and viewing areas on both sides of the curve and finish line. There is plenty of space for vendors, and a bike path, all alongside the beautiful Connecticut River at Barton's Cove, with the Turners Falls dam and bridge as the backdrop. Perfect.

The "why" was a little tougher, other than the obviuous "why not?" response. This event needed to be a fundraiser for something. After dicussing it with the Montague Grange and the Montague Business Association, it was offered to Montague Community TV as a fundraiser -- AND they could tape it for TV!  Perfect! We expect to raise over $6000 for MCTV.